Surprise announcement from Amazon today. They somehow managed to keep this thing under the radar up to now, a feat Apple hasn’t been able to pull off for a while. As tech bloggers like to say, Amazon continues to out-Apple Apple.

So what is this gizmo? It’s a black cylinder, 9″ tall by 3″ wide, with a light ring/volume knob, a couple buttons, and a bunch of microphones, plus a whole lotta holes for the hidden speakers.

What’s it do? A bunch of things…watch the video below for a full understanding, but my take is that Amazon Echo is essentially a wireless speaker with Siri/Cortana capability. Ask it questions you would normally google, tell it to remind you about stuff, tell it to play certain types of music, make shopping lists, etc. Nice when you’re cooking and have raw pork juice on your hands to be able to say “Alexa, what’s the next step in the recipe,” or “Alexa, how many cups in a quart?” (By default, you say “Alexa” to get its attention, but you can change this to whatever you want. “No” is probably not a good signal word.)

But those are just the “for now” features…

I see this as Amazon’s first step at becoming a central figure in your home that everyone interacts with, like what the X-box has become. It’s a shared device for the whole family, and their conduit to the Amazon ecosystem (and another reason to pay for Prime). I bet you there are internal Amazon presentations that show pictures of a proposed Echo home five years from now, where each room has an Echo posted in there.

“Alexa, turn off all the lights upstairs.”

How about adding a camera in a future version? “Ooh, the shoes in this catalog are cute! Alexa, put these babies on my wish list!”

There are limitless possibilities if it works seamlessly.

Amazon wants to get another foot in your door, and a wireless speaker that does more than wireless speakering is a smart way to begin, just as the X-box was never intended to be only a game console. The question is, will people really use it for all of this, or will it go the way of Siri for most people—a novelty for the first week or two, something to show off to friends, but then, enh, it’s simpler just to do it on my phone. I don’t think people mind being on their phones so much these days.

But get folks used to talking to a device… “Alexa play Christmas music,” and “Alexa, turn it down a little,” and suddenly we’re using it for a few more things each month. Like ordering groceries from Amazon. Replacement batteries from Amazon. Another Echo from Amazon. ANOTHER ECHO FROM AMAZON. Okay, yeah, it’s really not that scary. You’ll get one or you won’t. You’ll use all it’s features or you won’t.

UPDATE: And here’s one of the inevitable Echo parody videos (NSFW – apparently, Alexa gets sick of your sh*t pretty quick. She’s quite the potty mouth in this one.)

UPDATE 1/6/15: The Amazon Echo release date to the general public has finally been set. February 15 is the day, and it’ll cost you $199 (UPDATE: only if you don’t have prime. Prime members will only pay $99 at release). Everyone who Amazon invited to receive a pre-release version of Echo (at $99) has already gotten theirs, (UPDATE: Not true! See below!) and the reviews have been mostly positive.

UPDATE 1/9/15: Correction! I just received an invitation to buy an Echo, and still at the $99 price for being a Prime member, though it will apparently rise to $199 upon release, Prime member or not. The invitation stated that it could take “months” to receive my order, and my check-out confirmation stated April 20 ship date, which is the projected “In Stock” date listed on Echo’s Amazon product page: 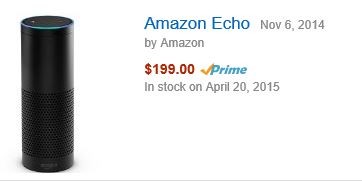